Innaccurate calculations
Using comparisons
"Packed" volume measurements
Information not at source
Tons, tonnes, long tons, short tons, and metric tons
Unfamiliar units of measurement
Press and Media Inquiries
Something else? Please Get in Touch
Your numbers are inaccurate, or your conversions aren't right. Why is that?

Here at The Measure of Things, we provide comparisons to measurements of things that exist in the real world. But the real world isn't as always precise as we'd like it to be, and the instruments we use to measure it aren't as accurate as we imagine.

Let's consider the weight of a hippo: We may ask "How does 10,000 kg compare to the weight of a hippo?" and expect to get a simple answer. However, like people, different hippos weigh different amounts, depending on their type, where they live, what they eat, and how old they are. Our original source, the Animal Diversity Web at the University of Michigan Museum of Zoology, tells us that a hippopotamus weighs between 3,000 and 4,500 kg. So, if we were using a specific hippo for our comparison, 10,000 kg could be as little as 2.2 times as heavy, or as much as 3.3 times as heavy. To keep things simpler, we take the average of that range and use a figure of 3,750 kg to generate our comparisons.

But there's still more complexity here: We need to account for the concept of significant digits. Measurements are usually imprecise, both when they're taken and when they're recorded. Whoever had the difficult job of getting each member of the herd of hippos (some people might call it a bloat, a pod, or a dale of hippos...) to step onto a scale probably took did some initial rounding. The values that we are left with — 3,000 to 4,500 kg — don't include any individual kilograms, or any fractions of a kilogram (we only have zeroes in the ones place, and we don't have any figures after a decimal separator). When we see values like this for a real-world measurement, we apply a set of rules to tell us how may digits are significant and we should keep:
Based on the first three rules, we see that 4,500 kg has two significant digits. They are the 4 and 5 (and because the 3,000 kg figure came from the same place, we assume that it's equally as accurate, and that it also has two significant digits, namely the 3 and the first 0). This means that our average figure of 3,750 kg is actually too accurate, because it has more than two significant digits and therefore it violates our rule number four, above. So when we store the value in our measurement database, we can only keep two significant digits, and we round up to 3,800 kg before saving. As a result, we say that 10,000 kg is about 2.6 times the weight of a hippo (or that the weight of a hippo is 0.38 times 10,000 kg). That's still a little clumsy, so for the comparison headline, we say that 10,000 kg is about two-and-a-half times the weight of a hippo. It's not a true statement for every hippo in the world, and the rounding may cause numbers to look less precise than you would expect, but it meets our goal of providing a reasonable comparison for our 10,000 kg search.

Sometimes, we provide comparison measurements that are really, really accurate, with many digits after the decimal point. For example, we say that 550 sq. m is 1.109681486 times the size of a Basketball court. The reason we can be more accurate about basketball courts than we can about hippos is because we aren't actually comparing against real basketball courts. Instead, we're using the measurements from the National Basketball Association (NBA) rule book. The rules specify the exact length and width (in feet) of a basketball court, and when working with a number like that, the significant digit rules don't apply - we can calculate values as precisely as we want. A real basketball court probably won't have these exact dimensions down to the millimeter, but the when using the rule book as our source, we can provide very accurate comparisons.
Back to the Topics List

Still have questions? Contact us
What can I do with this information?

We provide comparisons both for fun and for reference. If you're looking for suggestions about what you could do with this information, here are a few:
If you want some examples of how others have used our comparisons, check out our Press page.
Back to the Topics List

Still have questions? Contact us
Why are some items in the volume category listed twice? What does "packed" mean? 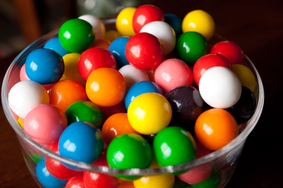 Take a look at the picture of gumballs to the leftabove. You'll notice that the gumballs have a lot of open space between them — the dark or shadowy spots in the picture. When you put a quantity of solid items, like gumballs, together in a container, you always have some empty space leftover where you don't have enough room to fit additional items.

Mathematicians who study examples this phenomenon call it the "packing problem." They have several models to represent the way in which the objects are packed into the container — basically to represent situations that differ based on how carefully the items were packed. One of these models is called the "random close pack" model, which describes the method of packing a container by adding spherical items, shaking the container, and then adding more spherical items. In a random close pack situation, the model predicts that about 64% of the total volume of the container will be occupied by items and the rest of the space will be empty. This figure is referred to as "packing density."

If, on the other hand, you took all the gumballs, and melted them into gumball soup, you would fill all of the available space. When you search for volume comparisons, we will show you two results: the "packed" comparison that represents the real world results — the total number of items you could fit in a container with some empty space left over — and the turn-them-into-soup result, where we don't worry about empty space between items.
Back to the Topics List

Still have questions? Contact us
Your source link doesn't contain the information in your description. Why not?

We provide links to all our measurement sources so you can be confident that we aren't just making up numbers. But the Internet is always changing. If you find an old link that no longer works, please feel free to let us know using our Contact page.

For some of our items we also include a fun fact, which may contain information from another source, or even information from multiple sources. Hopefully these tidbits are interesting to read, but listing all of our research for these fun facts would make the site harder to understand and to use.
Back to the Topics List

Measurements have been around for a long time and have been used by different groups of people to mean different things in different places and at different times. The "ton" is a good example of this.

The "ton," as it is now most commonly used, is the same as the "short ton" (keep reading for more information on the history of that name...). It is used most commonly in the United States and Canada. One (short) ton measures 907.18474 kilograms or 2,000 (avoirdupois) pounds.

The "long ton" (sometimes called the "weight ton" or "imperial ton") is a unit that isn't used as much anymore, but which was once popular in the United Kingdom. British law defined the long ton as 2,240 (avoirdupois) pounds, which equals 1,016.0469088 kilograms. The terms "long ton" and "short ton" were created to distinguish between these first two kinds of tons. You may still hear the word ton, but the meaning will depend on what part of the world you're in.

The "metric ton" is the same as the "tonne" and is used in the International System of Units (SI). It is equivalent to 1,000 kilograms or 2,204.62262184878 (avoirdupois) pounds. (It's defined in SI as the mass of one cubic meter of water at 4°C). In countries that use SI, this is the most commonly-used kind of ton. The spelling is from the French word for ton, as the French were the first to use the unit.
Back to the Topics List

Still have questions? Contact us
I've never heard of that unit before. What is it?

Ever since human beings have been trading with each other, there's been a need for them to share a common way of describing physical quantities of things. Many different societies solved this problem in many different ways, and the result is a legacy of different units, in different languages, with different meanings. For information about a specific unit or for more information about units of measurement in general, see the following Wikipedia article: https://en.wikipedia.org/wiki/Unit_of_measurement

Of course! Feel free to get in touch with us using our Press Inquiries page if you have questions.
Back to the Topics List